Mari van Wyk is married to Gafie van Wyk with 2 sons, 30 and 22 years of age. She was born in Rustenburg, North West and grew up in Mpumalanga, Gauteng and North West. Mari studied at Stellenbosch University School of Business and now lives in Cape Town.

"I enjoy everything nature has to offer, I love dogs and enjoy a good book now and then when I have time to read something other than work related content.  I am the Executive Manager for Strategic Alliances & Partnerships at LexisNexis SA. I enjoy a good workout on a daily basis. I’m climbing to restore dignity to our girls and to ensure they can attend school and completed their education. Simple as that".

Climbing for a Cause

Mari van Wyk, Executive Manager of Strategic Alliances and Partnerships at LexisNexis South Africa, recalls the day Professor Thuli Madonsela invited her to be part of the Thuli Madonsela Executive Climb up Kilimanjaro.

The first time I heard about Professor Thuli Madonsela’s commitment to climb Kilimanjaro, was at the Integrity Lapse event held in Cape Town in November 2018 where both she and I were speakers.  I thought this was such a good cause! I was also told that Thuli’s expedition team will be on invitation only, which is understandable.  I never thought I would crack an invite.  I mean, let’s face it, Thuli deals with a lot of people, she can literally pick and choose.  I never thought about it again. Then I had a meeting with the Prof on 19th February to discuss an alliance agreement between LN and herself as the Trust Chair in Social Justice at Stellenbosch University Law Faculty.  On my way out, the following conversation happened:

Thuli: Mari, come climb Kilimanjaro with me.
Me: Is that an invitation?
Thuli: Yes, there are costs involved but yes.
Me: Please send me the information for my consideration. 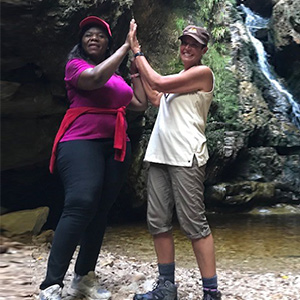 I already knew in my heart that I was going to say yes, but I told myself, “Don’t look over eager. Pretend it’s a serious decision and some thinking needs to be done before you commit”. I got back home and I said to my husband, “I’m climbing Kilimanjaro in August”.  He gave me the poker face look and just said “I’m sure you will be able to do it”.   After 33 years of marriage, he is used to me getting bees in my bonnet from time to time and then nothing will stop me from doing what I have in mind. I waited a week before I responded and committed as an independent climber.  I told our COO Stephen and GM: Corporate Communications & Brand, Nelly, in our weekly catch-up meeting.  They must have thought I’m crazy but my “Why” was defined: “These young girls face many obstacles in their lives, the circumstances they live in, many don’t have regular meals each day, clothing etc. and to be without such a basic necessity when they enter womanhood is unthinkable.  I want to remove one more obstacle from their daily battles, which will make it possible for them to attend school and be educated.  One less thing to worry about. Education is the one thing in life, no one can take away from you.” As I committed to the task, I felt excitement, humbled, energised and extremely grateful. 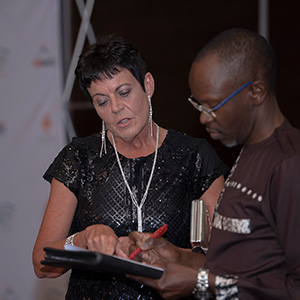 Mari van Wyk, Executive Manager of Strategic Alliances and Partnerships at LexisNexis South Africa, recalls how she faced her fears during her first training session in preparation for the Thuli Madonsela Executive Climb up Kilimanjaro.

My first training session with Thuli was in Jonkershoek, Stellenbosch.  It was an easy hike up to the second waterfall on a hot Saturday morning.  On our way up we had our snack break down by the river.  Our guide for the day, Michael, climbed Kilimanjaro in 2018 and he was sharing his experience with us.  I had mini panic attacks as I was listening to him. It doesn’t take much for me to get cold. To hear that you might face temperatures as low as minus 20 on the summit day, when your body is already deprived of oxygen, and your legs tested to their limits, was enough to send shivers down my spine. Michael told us how your mind apparently shuts off and you can get disorientated, which makes you walk in the wrong direction, even how your mind will tell you to take the next step but your body doesn’t respond. But hey, we can only die once and should therefore live every day to the fullest. I told myself, snap out of the panic and start thinking about how you can prepare yourself better. We changed the conversation and talked about food, snacks, hiking poles and mental preparations. We had to climb over boulders to reach the second waterfall.  On our arrival, Thuli and I did a high-five, and just said, our next high-five will be when we summit Kilimanjaro on 9th August. We filled our water bottles from the waterfall and Thuli had some fun with students swimming in the pool beneath it.  It was a relaxed hike and we were grateful that we all managed to get it behind us. A renewed focus on living a healthier lifestyle has seen Mari van Wyk, Executive Manager of Strategic Alliances and Partnerships at LexisNexis South Africa, go from being unfit and physically ill to taking on the Thuli Madonsela Executive Climb up Kilimanjaro.

I had a bone to pick with the Drakensberg.  In 2018, LexisNexis Legal Information & Compliance had its sales conference there.  We did an Amazing Race challenge and I ended up with GM: Lexis GRC, Bosman Stamrood’s team. Bosman is very fit.  Yet there I was, huffing and puffing and it wasn’t even long distances or steep inclines we had to tackle.  I vowed to myself that I will get fit and if ever I get the opportunity, I’ll come back to the Drakensberg and be fit enough for any challenge.  Never in a million years did I think that the opportunity would present itself less than 12 months later. To reach our first official training session we drove in a minibus from Johannesburg to the Drakensberg.  There were 30 climbers excluding the guides.  A few of us doing the August climb trained with a group of youngsters, between 25 and 34 years old, who are tackling the first climb in July for Mandela Day.  We did roughly 26 km for the day.

I am because we are

I saw the true spirit of Ubuntu on this day.  Helping hands were offered to anyone who battled. Food, water and sunscreen were shared.  There was lots of fun and laughter but also serious discussions about social challenges, politics, gender and cultural differences. By 5pm Richard Mabaso (CEO of the Imbumba Foundation) called us all together and said we were running behind schedule and were going to run out of daylight.  I realised my cellphone battery was about to die and I wouldn’t be able to use its flashlight to get me down if necessary. Richard said it would be at least a two-hour descent. His words, “Those of you who can move fast, go for it,” were the only motivation I needed to settle my score with the mountain. At that stage, I was in the company of two young gentlemen, one called Clement and another I’ll call ‘Darling’ because I can’t recall his name now.  They are both relatively fit and we started jogging. We reached the parking lot at 18:30. I was the first one down from the mountain, with Darling and Clement hot on my heels. It was only in the parking lot that I discovered Clement is an actor in a TV Series called Skeem Saam and has almost 1 million followers on Twitter.  He is one of the humblest people I’ve ever met. The day ended victoriously.  For the first time I am starting to think that maybe I can climb Kilimanjaro ;-) But the Drakensberg has two more tests in store for us, a climb to Sterkhorn and hopefully one to Cathkin Peak. These two, will be my real test to show if I have truly conquered the Drakensberg