Over 700 girls at two Eastern Cape schools will have a greater chance of staying in school to reach their full potential, thanks to the fundraising efforts of a local woman who climbed Mount Kilimanjaro in their honour in August.

The Imbumba Foundation, through its Caring4Girls programme, is on a quest to have provided menstrual hygiene support and education to two million disadvantaged South African girls by 2020. It aims to help eradicate absenteeism among young girls, who often skip school when they do not have access to basic sanitary protection during their menstrual cycles.

Supporting the organisation on this quest are a number of leading corporates including LexisNexis.

On Friday, 7 February, LexisNexis and the Imbumba Foundation visited the school to hand over a one-year supply of sanitary towels donated by LexisNexis employees for each girl in the school.

LexisNexis Bloemfontein Branch Manager, George Tsikkos, said: “There is a lack of understanding, empathy and support for young women going through puberty in school environments that are not equipped to provide adequately for their dignity. There are many challenges that young South African women must overcome daily - and for many students in impoverished communities, basic necessities are often overlooked to put food on the table.”

He said the LexisNexis and Imbumba partnership aligned with the company’s overall commitment to upholding social justice and advancing the rule of law.

“Education is a fundamental need that cannot be overlooked in society and it is our hope that as a socially conscious business, we have contributed towards raising awareness to such intricate matters which affect society and we hope that our contribution is a start to transforming lives for the better,” he  said.

The school’s principal, Tshepho Tlomatsana, said they were humbled by the opportunity because they wanted to ensure their girls had 100% attendance.

“Our learners are from very poor economic backgrounds. Our girls in this school lose a lot of contact time because they are from poor backgrounds. I want to thank LexisNexis for choosing us because we have potential at this school. Our results show that if we get support from all stakeholders, we will make it,” she said.

LexisNexis and the Imbumba Foundation originally partnered on the Thuli Madonsela Women’s Day Executive Climb up Mount Kilimanjaro in August 2019. This was the second of two summit groups in the 2019 Trek4Mandela initiative spearheaded by the foundation. LexisNexis was not only headline sponsor of the climb and had two women among the crew who summited Kili on Women’s Day, but has also run a host of related initiatives to help Imbumba on its quest to change the lives of disadvantaged girls.

Last year also saw the handover in East London of more than 9,000 sanitary pads to Gasela High School in Mxhoxha near King William’s Town and Lumko High School in East London. This was the result of a drive by Lee-Ann King, National Deployment Manager at LexisNexis South Africa, who participated in the climb and ran a fundraising campaign as a Trek4Mandela participant, as did Mari van Wyk.

Caring4Girls and Trek4Mandela were founded by social entrepreneur, Richard Mabaso, who rallies together a phenomenal group of individuals annually for this worthy cause. The Thuli Madonsela Women’s Day Executive Climb during this year’s Trek4Mandela campaign saw the former Public Protector lead a group of influential professionals to the summit to raise funds for the Caring4Girls menstrual hygiene programme run by the Imbumba Foundation.

Below: Left and right: On 7 February girls atMoshaweng Secondary School in Loopeng, Northern Cape each received a one-year supply of sanitary towels from LexisNexis South Africa, in partnership with the Imbumba Foundation, through its Caring4Girls programme. The donation is an outcome of the 2019 Trek4Mandela initiative. 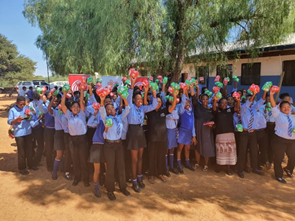